History of the Israelites: Did the Curses of Musa (PBUH) come to pass? 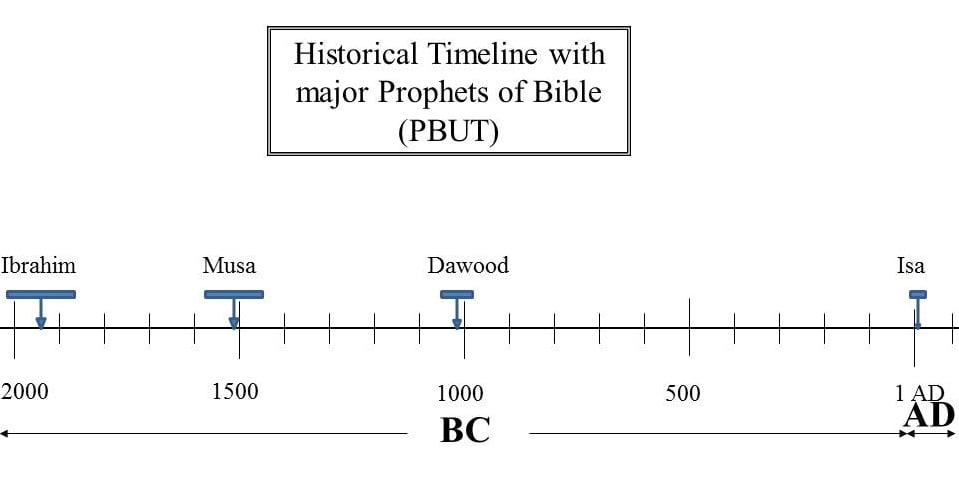 The Most Recognized Prophets of the Bible

This timeline uses the Western calendar (and remember this is all BC or BCE dating).  The width of the bars shows how long that particular prophet lived.  Ibrahim and Musa (PBUT) are important for their Signs which we have looked at already.  Dawood (or David – PBUH) is recognized because he started the Zaboor and he was the first King of a dynasty that ruled from Jerusalem.  Isa al Masih (PBUH) is important because he is central to the Injil.

We see in the green period that the Israelites had been living as slaves in Egypt. This period of time started when Yusuf (or Joseph) great-grandson of Ibrahim (PBUT) led his people to Egypt, but they became slaves there.  Musa (PBUH) led the Israelites out of Egypt with the Passover Sign.

So with Musa (PBUH) the history of Israelites changes and it is now shown in yellow. They live in the land of Israel (or Palestine).  Musa (PBUH) pronounces the Blessings and Curses on them at the end of his life – when the timeline goes from green to yellow.  So for several hundred years the Israelites live in this land promised in Sign 1 of Ibrahim.  However they do not have a King, nor do they have a capital city of Jerusalem – it belonged to other people in this time period.

However, with the sending of Dawood (or David) about 1000 BC to the Israelites this changes. Dawood (PBUH) conquers Jerusalem and makes it his capital city where the King’s palace was and he was anointed as King by the Prophet Samuel (PBUH).  And his son Suleiman (or Solomon), also famous for his wisdom, rules as his successor.  Suleiman builds a wonderful Temple to the LORD in Jerusalem.  The descendants of King Dawood continue to rule for about 400 years and this period is shown in light blue (1000 – 600 BC).  This was the glory period for the Israelites – they started to see the Blessings promised.  They were a world power, had an advanced society, had culture, a Temple and this was the period when many prophets had messages from Allah and they are recorded in the Zaboor that David started.  But the reason that there were many prophets sent was because the Israelites became more and more corrupt, worshiping idols, and disobeying the Ten Commandments.  So Allah sent them prophets to warn them and remind them that the Curses of Musa would come upon them.  But the Israelites did not listen.

So finally around 600 BC the Curses came true.  Nebuchadnezzar, a powerful King from Babylon came – and just like Musa had predicted in his Curse when he wrote

The Lord will bring a nation against you from far away … a fierce-looking nation without respect for the old or pity for the young.  …  They will besiege all the cities throughout the land. (Deuteronomy 28: 49-52)

Nebuchadnezzar conquered Jerusalem, burned it, and destroyed the Temple that Suleiman had built.  He then took the Israelites and deported the majority across his vast Babylonian Empire.  Only the poor Israelites remained behind.  Thus was fulfilled the predictions of Musa that

You will be uprooted from the land you are entering to possess.  Then the Lord will scatter you among all nations, from one end of the earth to the other. (Deuteronomy 28:63-64) Conquered and exiled to Babylon

So for 70 years, the period shown in red, the Israelites lived as exiles outside the Promised Land.

After that, the Persian Emperor Cyrus conquered Babylon and Cyrus became the most powerful person in the world.  And he issued a decree that permitted the Israelites to return to their land.

However they were no longer an independent country, they were now a province within the vast Persian Empire.  This continued for 200 years and is shown in pink in the timeline.  During this time the Temple was rebuilt (known as the 2nd Temple) and the last prophets of the Old Testament had their messages.

And then Alexander the Great conquered the Persian Empire and made the Israelites a province in his Empire which also continued for another 200 years.  This is shown in dark blue.

Then the Romans defeated the Greek Empires and they became the mighty Roman Empire.  The Israelites again became a province in this Empire and it is shown in light yellow.  The prophet Isa al Masih lived in Israel in this time.  This explains why there is a Roman Governor and Roman soldiers throughout the account of the Injil – because the Romans ruled the Jews in the Land during the life of Isa al Masih.

However, from the time of the Babylonians (600 BC) the Israelites (or Jews as they were called now) had never been independent again as they had been under the Kings of Dawood.  They were ruled by other governments of other people. They resented this and after the passing of Isa al Masih they revolted against Roman rule.  A war of independence started.  But the Jews lost this war.  In fact the Romans came and destroyed Jerusalem, burned down the 2ndTemple and deported the Jews as slaves across the Roman Empire.  Since this Empire was so vast the Jews were effectively dispersed across the whole world. 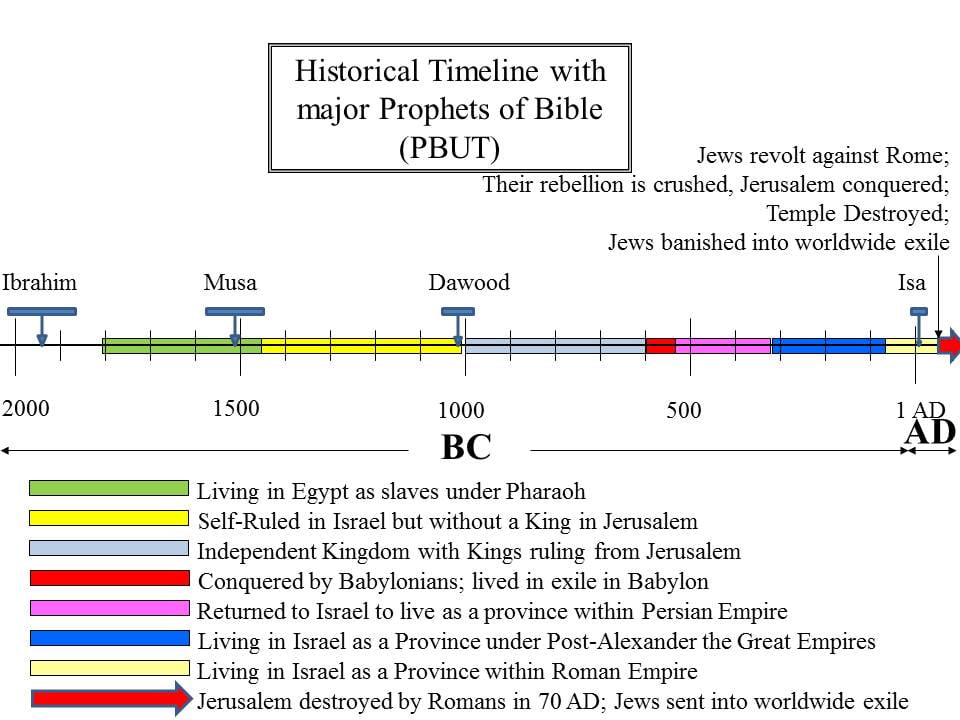 And this is how they lived for almost 2000 years: dispersed, fragmented, living in foreign lands and never accepted in these lands.  The words of Musa given in the Curse were fulfilled as it was written

… Among those nations you will find no repose, no resting place for the sole of your foot. There the Lord will give you an anxious mind, eyes weary with longing, and a despairing heart. (Deuteronomy 28:65)

So were the Curses of Musa fulfilled?  Yes they were, and to every detail.  The Curses against the Israelites were given to make us who are not Jews ask:

All the nations will ask: “Why has the Lord done this to this land? Why this fierce, burning anger?”

And the answer will be: “ … the Lord uprooted them from their land and thrust them into another land…” (Deuteronomy 29:24-25)

This is an important Sign to us to take the Prophets’ Warnings very seriously – because there will be warnings for us as well.

Of course this historical survey only goes up to about 2000 years ago.  Click here to see how the blessings and curses of the prophet Musa (PBUH) concluded into our modern times.

No comments to show.